It's a long weekend and I had time to play with my journal layout! 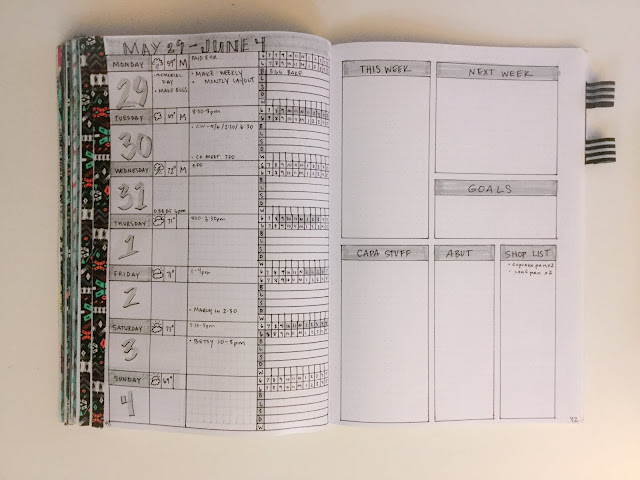 Nice and New!  I was so excited that I started marking it up already, just jumped right in!

I was able to take a few notes from last week, and turn them around for this week's Tuning.  I found that I had a few tracker and layout ideas that ended up falling by the wayside; biggest layout fail was my meal tracker. 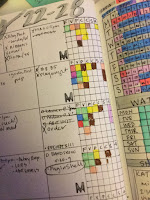 I've been doing a retrospective, track what I ate by color style food tracker.  I had given myself the goal of trying to eat the rainbow in fruits and veggies everyday.  So, I set up a small grid on my weekly layout and I would color in a square with the corresponding color of fruit/veggie I consumed each day.  It's been nice, but I had to carry around all of the different marker colors, and tracking 4-5 times a day (since I eat smaller meals throughout the day) it actually took time out of my day to fill in the tracker.  So, this week I will track my meals, in planning form/ in advance, not just color.  I do use a post-it for the week to plan out dinner (on the family calendar) and my daily food plan just kind of happens the night before.  So this week I'll try adding my food information straight into my journal, instead of on an outside list. 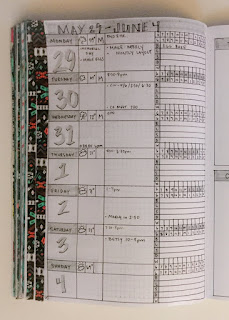 I like the weekly info/plan on the left, though it's becoming a bit crowded.  I have some plans for next weeks layout... keep it simple stupid....

I've come up with a few different ways to incorporate my lists, and not take so much time on layout.  I like the CAPA (work) to do list of the last few weeks on my post-its, but after 2 weeks I found several items were leftover from week to week, so I don't need as big of a space.

I have a couple of projects this month that will need to be pulled to the priority list, so I've added a few separate category lists to the right side. 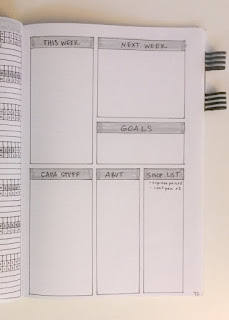 School schedules are winding down and I'm not working as many 12 hour days.  My schedule should go back to being predictable, 8-4 type of thing, and I'll be able to put less focus to my daily (ever-changing) work schedule.  Hoping for more time for fun and projects.

I'm excited to work on these new projects, I'm sure I'll have new page ideas and will try to share them here.  Look out for my New Monthly Spread- in Hello June... coming up next!

Posted by Janiegirl at 8:55 PM