Many of you know that my son turned 1 last week.  I can't believe time has gone by so fast.  I had a lot of fun making a whimsical environment for his 1st birthday.  I call Max my little Monster, he's the most lovable monster you could ever meet, and he's mine.  Since this might be the only time I get to plan his birthday party, I chose a Monsters theme.
I started projects a few weeks ago while filling orders, what a great way to stay inspired and motivated.  Fill an order and make a party favor, such fun!

First: Invitations
Since Max was turning one I chose to make one eyeball invitations.  Just as if a monster with one eye were looking at you, the theme continued as you will see. 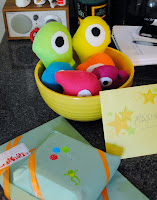 Second: Give Aways
We used these little guys as giveaway items, since most of the guests where babies we thought these where a great idea.  Everyone got to pick their own and everyone enjoyed them.  Notice they only have one eye!  Another set is available on my Etsy Shop!

Third: Tablecloth and Banner
I figured if I made one banner and tablecloth I could use them over and over again.  I kept them light and simple, just using three colors which I can reuse for future parties.

Fourth: Cupcake Toppers
Everyone knows I'm a little obsessed with Cupcakes.  I had never made a topper before.  So, I took smaller versions of the eyeballs I made for the invitations and made them into cupcake toppers.  Funny side note: I was walking thru Michael's yesterday and found similar items for sale for Halloween.  I paired them with some blue polka dot liners from Michael's and they tied everything together.  The pairing of the yellow and white polka dots on the table cloth was a funny coincidence.  I had asked my husband to pick up blue liners and these where what he found!

Fifth: Food, Food, Food!
It was so fun to think of food for kids and adults.  Ages ranged from 6months to 50+ and I thing everyone had their fill. Everything served is a staple in the Alexander Family, lets just say there weren't very many leftovers.
We used kiddie spoons and forks, it was fun to see adults using crayola spoons, everyone giggled at them.
Food was safe enough for toddlers and filling enough for adults.  For tips I've included my food ideas below.
Here's the menu:
Drinks:
Iced Tea, Juice Boxes, Milk Boxes
Sandwiches: without the crusts 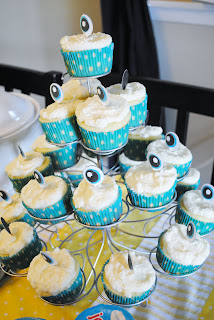